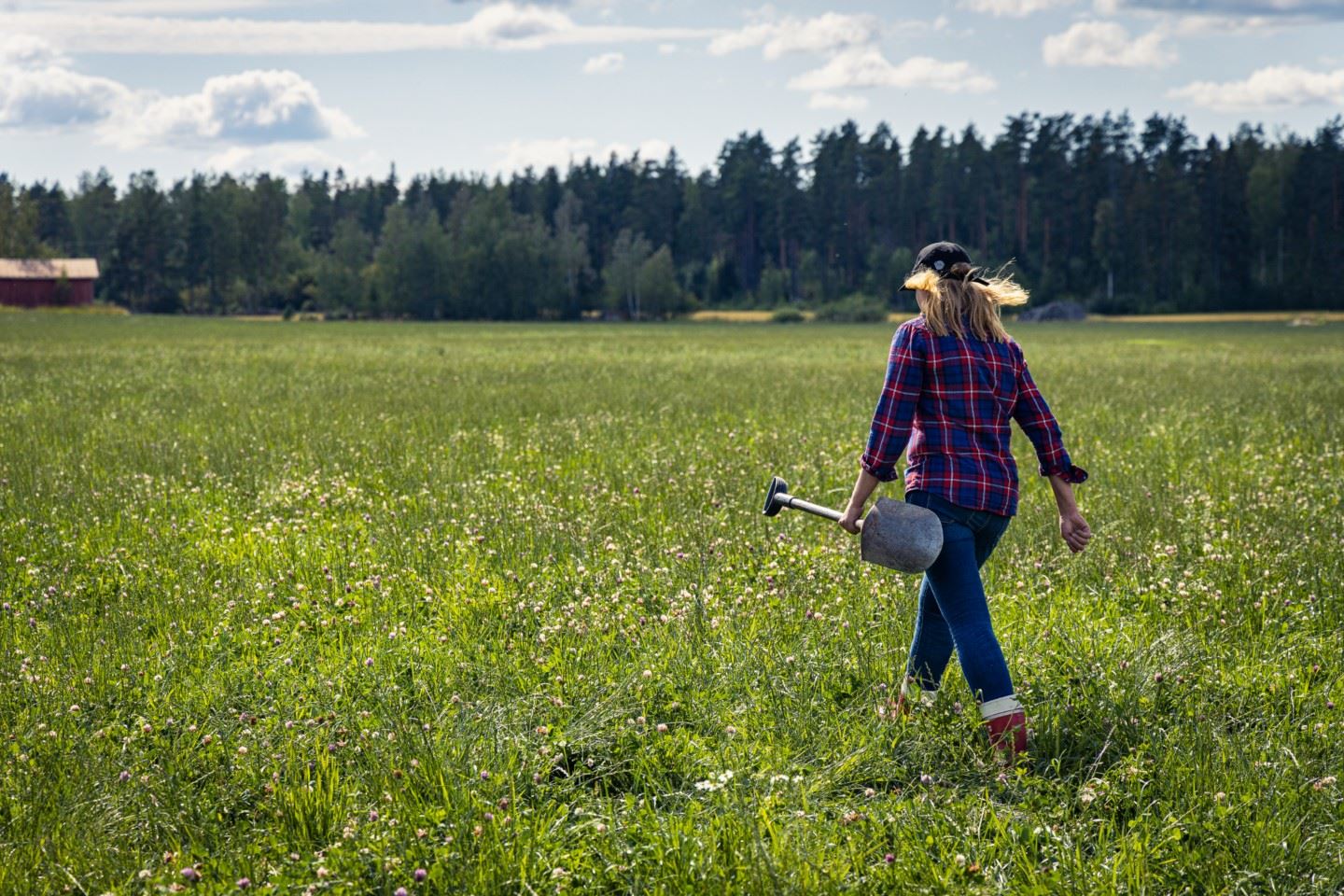 Carbon farming is a hot topic, and many wonder what it’s about. Traditional farming generates carbon dioxide emissions that heat up the atmosphere, but carbon farming aims to reverse that: using the right farming methods and plant choices make it possible to bind carbon in soil. There are many ways to do that, and some of them are very traditional.

When milk producer Anu Ellä observes the meadow growth at the fields of their Sukoinen farm, the most important tool is her shovel. She sinks its blade into the ground, lifts up a lump of dirt and checks its condition. Deep roots and soil condition are key in the soil’s ability to bind carbon.

Carbon farming is not new for the Sukoinen farm in Mynämäki, Southern Finland. Previous generations of farmers have put their soil on a pedestal for years. Now, in addition to being a milk farmer, Anu Ellä trains Valio’s dairy farmers and runs ProAgria’s small groups on grass; these groups are studying carbon farming through practical examples and an exchange of experiences. Roughly 250 Valio dairy farmers (updated in April 2020) have already participated in carbon farmer training, one of Valio’s actions aiming to cut milk production’s carbon dioxide emissions.

“Carbon farming hasn’t become a popular topic until recently, and even though as a word it’s new, the methods are tried and true,” says Anu. “Soil condition is what’s key. It’s all about the soil, as the old farming adage goes. It’s important to have thick grass growth so that weeds don’t have the space to grow. In addition to thickness, deep-rooted grass varieties are very important. We use dried manure as fertiliser and let our fields rest with crop rotations. Fields that are in good condition produce more, creating a better harvest, and they adapt better to varying weather conditions, like droughts or long, rainy seasons,” Anu describes.

In growing grass, she calls for a methodical approach and patience. Work properly from the get-go, and it’s easier to expand on later. It’s important to have a good foundation for a grass field, as it’s always more difficult to fix the issue later than to lay the groundwork correctly right away. You also need to give the grass time to grow – these changes do not happen quickly.

Anu Ellä highlights that it’s very important to go out to the fields to observe their condition regularly, including from beneath the surface. Soil condition and structure – and through it, successful carbon binding – can only be observed by digging up some dirt.

“Every farmer should observe their farms’ soil structure at different parcels of land regularly. A shovelful of dirt can be used to observe the soil’s structure, the number of microbiota, and the colour, which all show soil condition. I’ve also used drone photos to help with a birds-eye view of the fields’ condition. They can be very illustrative and help me to see if there’s anything we need to change. It’s also good do an annual nutrient analysis on growth or feed samples,” says Anu.

Grass is an environmentally friendly plant, as it remains green in the winter – unlike annual plants. Anu’s carbon farming know-how says that fields should stay green year-round so that plants can keep photosynthesis going, transferring carbon dioxide into the soil. She recommends growing cereal crops alongside grass and encourages other farmers to rotate their crops to keep their fields in good growing condition.

“I think grass deserves more respect, and us milk producers should talk more about grass and its role in growing other crops and carbon binding. Grass, after all, covers most of a dairy farm’s fields. It’s worth focusing on, as it’s important for the environment and biodiversity. Our cows stay healthier when they get to eat high-quality grass feed all year round,” Anu concludes.