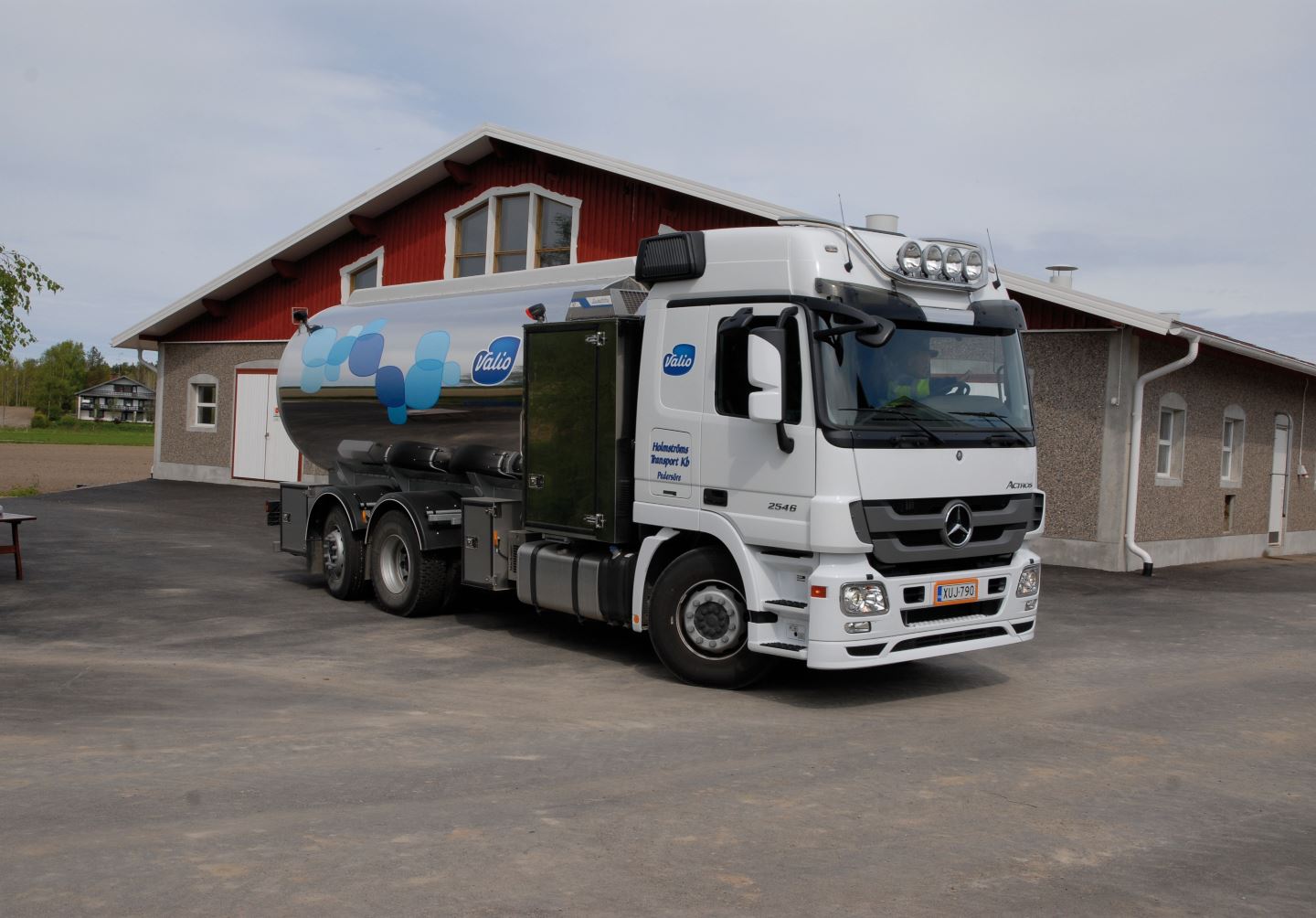 Sitting in a milk lorry cabin gives you a much higher vantage point than in many other vehicles, which helps when carrying a valuable load along winding dirt roads and stopping in farmyards that sometimes have very little space. Today, the milk lorry in Virolahti is being driven by Tomi Roimola who takes over from his brother Jukka at noon. Jukka started his day in the small hours.

The Roimola family has been working in milk transportation since 1954 when Mr Roimola senior bought his first milk lorry. The milk lorry is used in effect 365 days a year i.e. seven days a week. It only takes short breaks for maintenance.

– In addition to Jukka and myself, we have two hired drivers, says Tomi.

We start a three-hour tour in the Virolahti countryside. There are 11 farms waiting for their tanks to be emptied before evening milking and each farm is visited every other day. The lorry follows a tight schedule collecting from the farm tanks on time and transporting milk to the dairy for further processing.

Driving along winding back roads requires skill. In the summer, visibility is limited by trees in full leaf, and in winter the roads are often slippery. A milk lorry driver plays an important role in the Valio milk quality chain.

The dairy farmers check the milk in the tank regularly.

– We always first check the temperature in the farm tank. And then conduct a sensory evaluation of the milk, in other words take in its aroma to make sure everything’s OK. Only milk at the right temperature is pumped into the lorry,”Tomi explains.

The temperature of the milk must be below 6 °C. If the lorry calls at the farm directly after milking, a higher temperature is momentarily permitted. If the temperature is 10 °C or higher, the milk is not taken in. Most often the temperature of the milk in the farm tanks is around 3 °C, which also prevails in the milk lorry all the way to the dairy. An uninterrupted cold chain is key to high-quality milk. – Problems very rarely occur in sensory evaluation. If there’s something wrong, it’s usually due to a fault in the operation of the tank. The dairy farmers check the milk in the tank regularly, says Tomi.

– A sample is taken from each load which is then tested at the dairy. Before unloading the milk from the lorry, the driver conducts an antibiotic test. The quality of the milk is tested a number of times before it reaches the dairy, Tomi assures us.

Valio arranges quality control training for all new drivers. And all drivers take a refresher course every year and have a hygiene pass.

Milk lorry drivers work close to nature. That’s why they often think about the impact of their work on the environment. For Tomi, the issue seems to be particularly important.

– When you know the route it’s easy to plan the driving and let the lorry run on idle where possible. Economical driving saves a lot of fuel, which reduces emissions. And an anticipatory driving style is also less stressful, says Tomi.

Rational planning of the collection routes also saves energy. For example, it makes sense to visit small farms first where possible, because the load is then lighter for longer.

– Valio’s transport planners come up with the routes and we drivers input local knowledge. Tyre pressure also affects fuel consumption. The vehicle has a special system for monitoring tyre pressure that notifies the driver if the pressure is too low, Tomi adds.

The Roimola brothers’ lorry business has been acknowledged as environmentally friendly, and was elected transport company of the year in 2008 by Finnish Transport and Logistics SKAL.

Driving a milk lorry is a way of life

Tomi Roimola works with confidence. It takes just a few minutes to pump the milk from the farm tank into the lorry during which time he can chat with the farmers. Those in Virolahti are now worried about the dry weather. Some rain would be welcome so that the hay grows and they could start making silage.

– This job has many different features. As an entrepreneur you get to carry out a variety tasks. My brother Jukka and I have agreed that I take care of the paperwork, says Tomi.

– Shift work is of course quite tough. We rotate the different shifts among all the drivers equally. And you also get some exercise while working!

Milk lorries even occupy some of Tomi’s leisure time, as he is involved in an industry association. Furthermore, he participates in a Valio project to update the milk collection lorries’ measurement system.

– I regularly get together with other entrepreneurs in the transport business, which engenders a good spirit amongst us. We believe that co-operation generates strength in this line of business, too, says Tomi.

The milk lorry has completed its second collection round of the day. The milk is pumped into a tank trailer at a rest stop, and half an hour later Tomi starts a new round in Vaalimaa. Then 35,000 litres of milk will be taken to Valio’s Riihimäki dairy. At the end of the day, the milk lorry’s odometer reads around 600 kilometres.