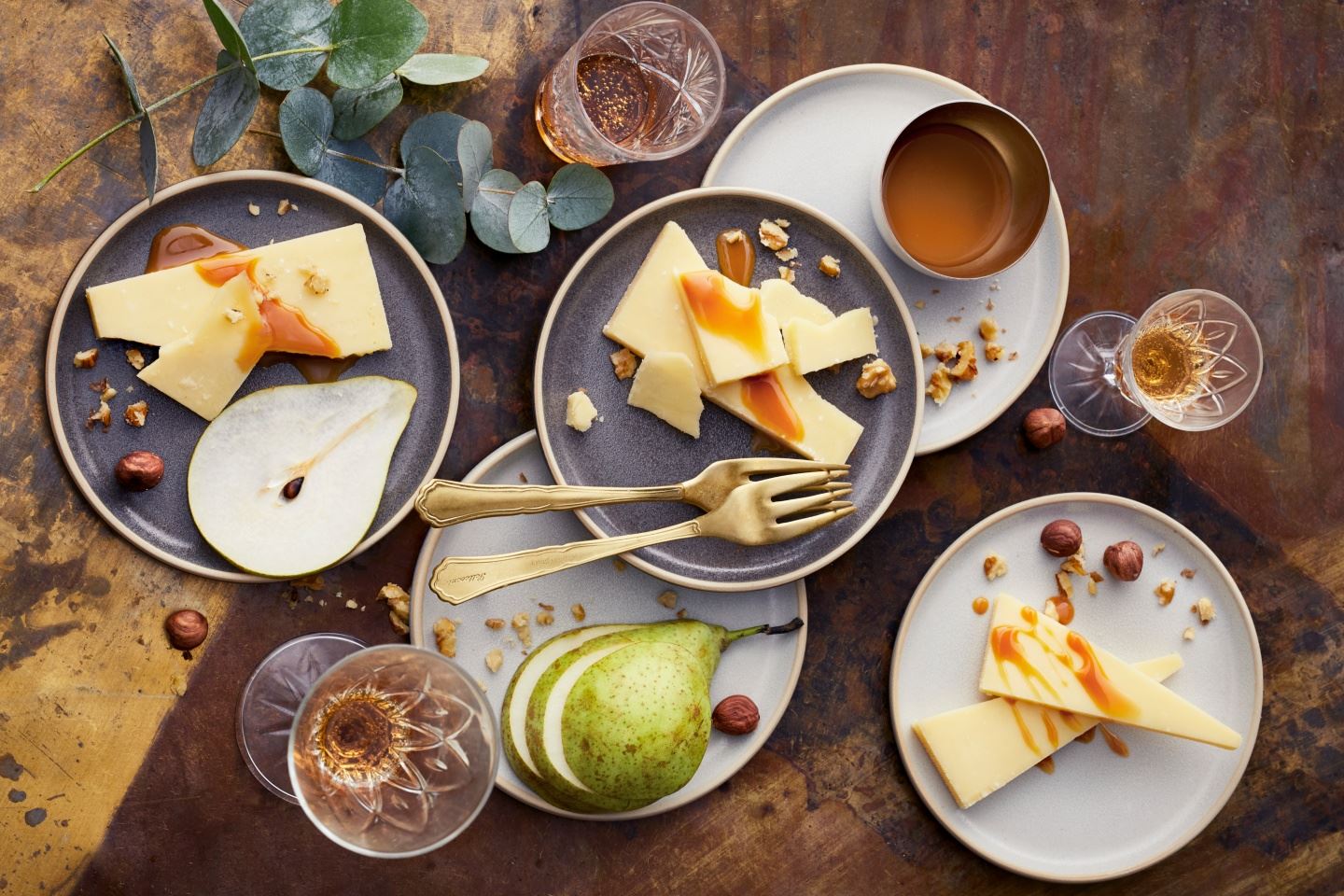 Developing a cheese’s taste requires the finest expertise and skill. How, then, are cheese flavours developed and how are they studied? Where does the taste of cheese and all its variation come from?

Product developers for Valio cheese describe cheese flavours in a simple manner: taste is chemistry! The flavours of cheeses are born in fat, protein and carbohydrates that the culture bacteria use to create flavour compounds. It could be said that you can’t make a hard cheese without culture, and culture plays a significant role in creating the taste. Developing the right kind of good taste is not simple.

If taste is chemistry, tasting is a skill. It could be said that tasting is a physical skill as much as riding a bicycle. You have to practice to learn, and some come to it easier than others. Naturally, genetics play a hand in addition to learning, as some people simply have more accurate senses of taste. This, particularly, has to do with bitter flavours. That is not to say that you have to have good genetics to be a professional taster, and it can be simply said that edam must taste of edam, and emmental must taste of emmental. Identifying them is vital. There are hundreds, if not thousands of flavour compounds, and practice with tastes is where a professional's expertise lies.

In studying the flavour dictionary for cheeses, you find out what this really means: in addition to the traditional saltiness, bitterness or creaminess, nearly every primary flavour has been divided into smaller, individual flavours. Developing the cheese flavour dictionary is one of the cheese product development projects, which is actively worked on. In doing so, we aim to make taste assessments as unified as possible, and a particular type of flavour is always referred to with a specific term. Fruitiness covers flavour profiles such as flowery, citrusy, apple-flavoured and blackcurrant-flavoured; earthy flavours include cellar-like, leathery, and putty-like.

What is the secret behind Valio's high quality cheeses and their product development?

Naturally, cheese quality is directly comparable to raw milk quality and its monitoring. Every batch of cheese goes through a sensory assessment before being released to the market. Quality assurance takes place throughout the production chain: at the farms, in milk receiving, during the manufacturing process, and in packaging the final product. Without our high-quality raw milk, it would not be possible to make these cheeses. Poor-quality milk can’t make good cheese. But Valio is an expert in both milk quality assurance as well as cheese product development and production.

Valio’s cheese research and development team wanted it to be possible for them to manufacture test versions for cheeses on a small scale in their laboratory. This resulted in a miniature cheese factory, where the first tasting pieces of new cheeses are made.

Cheese prototypes were traditionally made at Valio’s Test Cheese Factory, in Lapinlahti. One test run requires 500–1000 litres of milk, and the result is up to a hundred kilos of cheese. Many years ago, the Test Cheese Factory's hundred-kilo batch was the smallest possible test batch, until the cheese team joined with a small Finnish company to think of ways for the first tests to be run in a smaller scale – perhaps even in the product development laboratory?

Before, one test may have needed at least 500 litres of milk and now, the smallest possible batch can be made from one litre of milk.

This development resulted in the miniature cheese factory, which can be used to make small batches of cheese. Before, one test may have needed at least 500 litres of milk and now, the smallest possible batch can be made from one litre of milk. The miniature cheese factory can make up to a 400g piece of cheese in a day. The device was introduced as a Master’s Thesis work, and test runs began in 2012.

Conditions for the miniature cheese factory are very similar to the Test Cheese Factory. Cheeses mature at the same rate, three weeks and up, but it is now possible to also test different manufacturing conditions. It is also possible to test mouldy cheeses, as small test batches are easy to isolate in their own maturation containers.

The cheeses themselves also match those made at the Test Cheese Factory in quality. It can be used for tasting and analysis: sensory assessment for flavour and texture; if the goal is a particular flavour component, a miniature cheese is perfectly fine for chemical analysis.

Development work on cheese prototypes has a long history at Valio. Valio continues to have the parmesan-type Keitele cheese prototype, from 1965, in storage. It might not be viable for tasting anymore, but this highly aged piece of cheese remains as no-one has had the heart to discard it.

Valio’s selection includes various traditional cheeses, but very few of the ones that have been for the market longer are exactly the same as they once were. For instance, the recipe for Valio Koskenlaskija®, the processed cheese that is made from Valio emmental, has not changed since the 1930s, but many other things have changed on the way.

Milk quality has a significant effect on a cheese’s flavour. As milk quality has improved over the years, the cheese’s flavour develops to a purer direction, and the traditional cheese, made with the same recipe for years, gains new nuances. Classics also live within their recipes by taste preference, and for instance, we have aimed to reduce the amount of salt in cheese.

Cheese may be an invention that is thousands of years old, but there are still new things to discover and test in their flavours.