The Finnish dairy company Valio participated in the world’s biggest cheese show in Nantwich, England, for the first time. The Valio products included in the competition met with great success. Valio’s spreadable butter won gold in the spreads category, while Valio Cheddar received a very high commendation from the jury – the only Cheddar made outside traditional Cheddar-producing countries to do so.

Held in Nantwich, near Liverpool, since 1987, the International Cheese Awards is the world’s biggest cheese show, this year including a total of 5,685 cheeses competing in 224 different categories. Besides cheeses, the competition also evaluates other dairy products, such as spreads and yoghurts.

Known for its innovative dairy products, Valio was established in 1905 as an exporter of butter. The company’s long history in the manufacture of high-quality butter was visible in the competition results. The authentic and natural taste of Valio spreadable butter – made from Finnish butter and rapeseed oil without additives – charmed the judges. The product won gold in the spreads category, which included 15 participants from various countries. Valio’s unsalted butter won bronze in the unsalted butters category, which included 14 butters.

Valio Cheddar participated in the mild Cheddar category – it was the only Cheddar cheese made outside traditional Cheddar-producing countries, such as the UK, Ireland and New Zealand. The jury awarded it a Very High Commendation, a distinction awarded to one or two products in addition to medals in some of the competition categories.

Another of Valio’s sources of pride – Valio Emmental Black Label cheese – also did well in the competition, in which it went up against 13 other products in the Scandinavian cheeses category.

“Valio’s products are made with over a hundred years of experience, from milk that comes from Finnish family farms and that is among the purest in the EU. In Finland, we’re known for supremely tasty, innovative dairy products, and we’re proud that they are also successful abroad”, says Kimmo Luoma, Senior Vice President, Cheese and Butter Product Group. 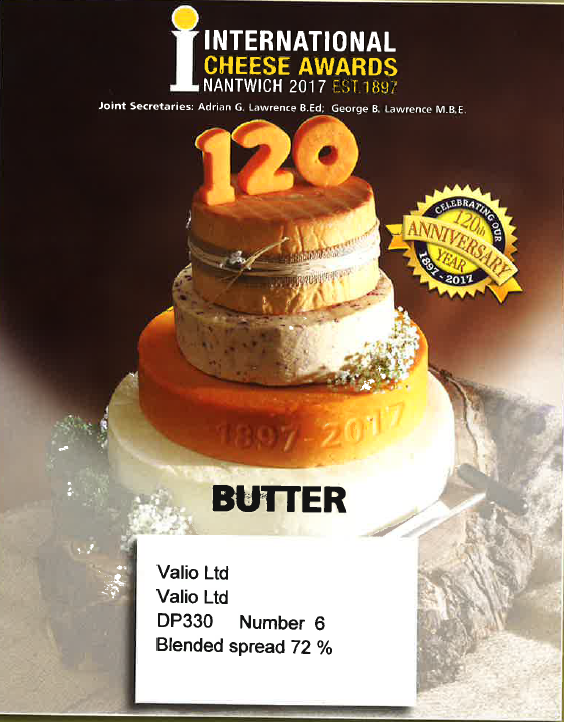