We intend to reset milk’s carbon footprint to zero by 2035. One part of this goal is to reduce our plants’ emissions and energy usage. This summer, we made three important trades to help us reduce our usage of fossil fuels.

Adven Oy operates energy facilities at Valio plants all around Finland. This partnership at Seinäjoki is expanding, as we respond to growing energy requirements with a new four-megawatt boiler facility. It will burn wood-based biofuels that are sourced in the nearby regions. In the future, we will produce less of our energy on oil. The new boiler facility will also serve as a replacement for peat. Their contract at Pitäjänmäki is being renewed with a new two-megawatt bioenergy plant being constructed by the juice plant. Our juice plant has, so far, produced energy on natural gas. Its new boiler facility will use biopellets as fuel.

In addition to the boiler facility projects, we will be buying some of our energy as wind power. This share covers roughly a fifth of Valio’s energy usage, which corresponds to that of roughly 2,500 detached houses with electric heating.

- We use power to run pumps and fans as well as to generate mechanical force – to run our machines. Most of the power is needed for cooling and cold storage. Heat, on the other hand, is used to cook cheeses and drying milk powder with hot steam, for instance. Milk pasteurising requires first heat, and then cold immediately after. When yoghurt production switches from strawberry to banana, the pipes must be washed, and energy is needed to heat the water. Keeping our facilities warm and lit also takes energy, says Energy Manager Peter Fabritius.

- One of our larger goals is to stop using fossil fuels altogether. Currently, we still produce energy through burning, but one day, we may be in a situation where all our energy is made on carbon dioxide-free electricity. It could be said we are in a kind of transition. Our juice plant is replacing natural gas and Seinäjoki is putting away oil and peat. In the future, we will strive to reduce peat use by replacing it with biofuels,” Peter continues.

Both projects, at Pitäjänmäki and Seinäjoki, should be complete during 2020.

- In recent years, our work to reduce our energy usage has been good. That is not, however, enough, and we must look for new opportunities to improve our energy efficiency and reduce emissions,” says Peter.

Valio is included in the Industrial Energy Efficiency Agreement. Our goal is to carry out, during 2017-2020, energy efficiency measures that match four percent of the power and heat consumption in 2015. In 2017 and 2018, we have achieved 2.2 percent of that goal, which means that by keeping up with this progress, the goal will be reached by the end of 2020.

Heat for Valio plants is produced at solid fuel boiler facilities for eight plants: Oulu, Haapavesi, Lapinlahti, Joensuu, Äänekoski, Seinäjoki, Jyväskylä and Riihimäki. If there’s other industry in the region that uses heat, we work together to source our heat.

The Seinäjoki and Pitäjänmäki heat boilers will also have a steam battery, which is a large tank full of water, where the contents are kept at the boiling point. Changing the pressure in the tank either vaporises or condenses the water, which allows us to change the steam volume quickly. This helps to reduce the use of these solid fuel boilers and thus the use of auxiliary fuels. Seinäjoki and Pitäjänmäki both use gas diesel oil as fuel. 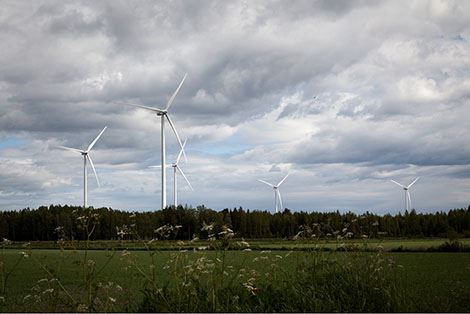