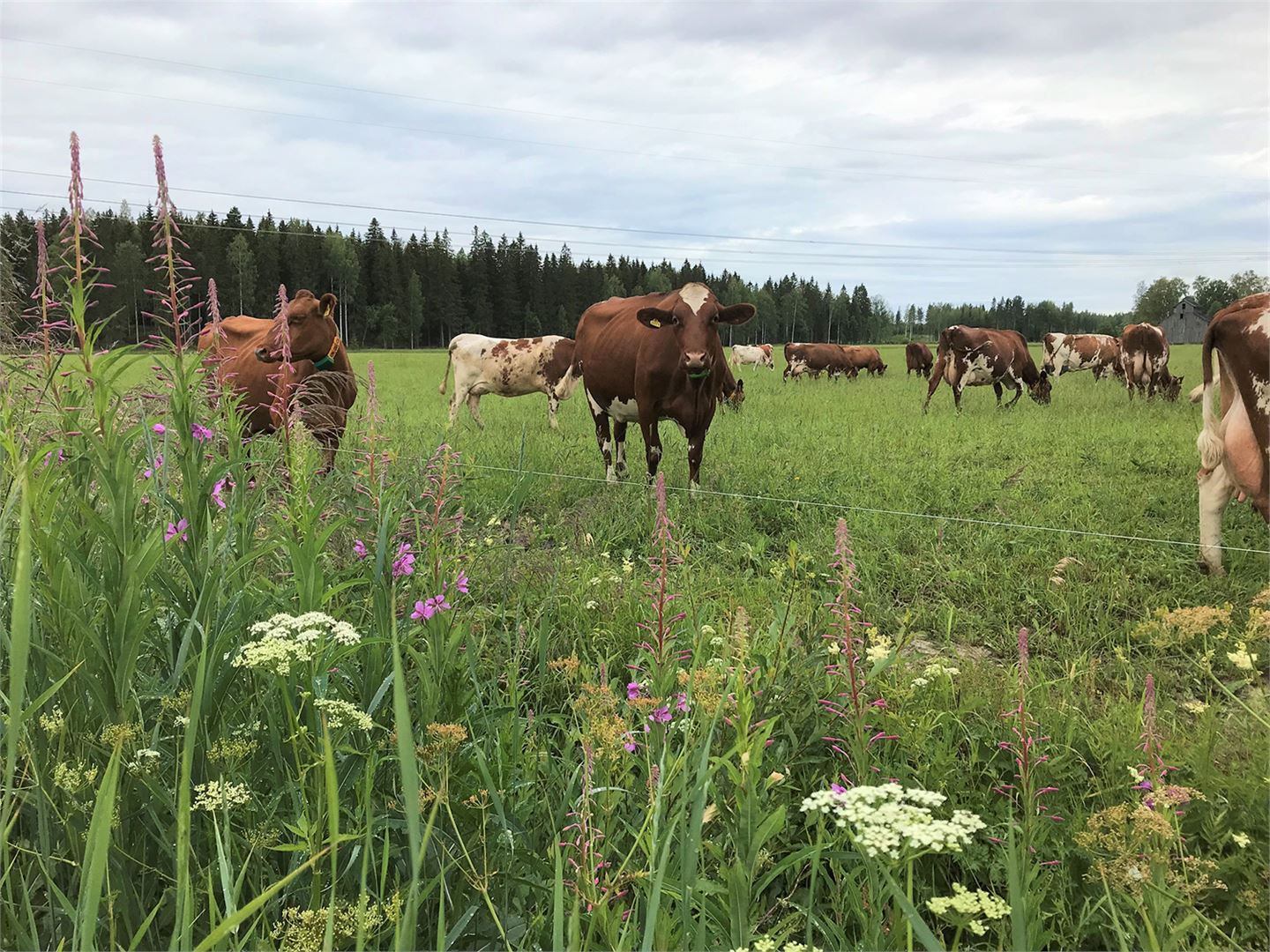 Biodiversity refers to internal genetic variation, abundance of species and the diversity of living habitats.

Impacts of dairy farming on biodiversity

Agricultural habitats in Finland are very species-rich and diverse in proportion to their total area.

Especially at dairy farms, the mosaic-like variation of different farming plots, meadows and pastures diversify the habitat. Natural pastures are the most biodiverse, but the most efficiently cultivated grasslands and grain fields also have a role to play in biodiversity. In addition to the actual agricultural land, other important habitats include the dairy farm courtyard areas, the edge areas of yards and field roads, and the buildings on the farms.

Of all the Finnish habitats classified as threatened, about a third are traditional biotopes that were once created by milk production. Over one hundred years, the amount of traditional habitats in Finland has decreased by more than 99%. It is noteworthy that nearly a quarter of all species classified as endangered in Finland use traditional biotopes as their main habitat. In fact, the continuation of milk production – in particular grazing – is vital for the conservation of habitats and species in traditional habitats. We encourage all dairy farmers to graze their cattle.

Cultivating a diverse range of plant species and varieties for grass forage increases the diversity of the agricultural environment. At the same time, the adverse impacts caused by extreme weather phenomena are mitigated.

When there are many species, crop reliability increases, the soil biota is enriched and the soil structure improves. We share know-how with dairy farms around Finland through the Valio and cooperatives’ small group activities.

Valio launched the first Valio Carbo® grass seed mix in 20219, and now there are six different seed mixes for different conditions and purposes, from silage production to pasture grass. The varieties we selected strengthen biodiversity and effectively bind carbon from the atmosphere into the soil.

Even though natural pastures have more importance for biodiversity than farmland, many bird and insect species also use farmland as habitat.

Valio is Finland’s biggest processor of organic milk. Organic farming is an effective way to maintain biodiversity in agricultural areas, and it enriches vegetation and birdlife in particular. The differences in the biodiversity impacts of conventional and organic milk production come from the way cows are grazed and the use of pesticides and artificial fertilisers.

Our ways to secure biodiversity

Valio’s dairy farmers are a significant land owner group in Finland, and our operations have a direct impact on biodiversity. In 2020 we worked with experts to extensively study domestic milk production’s impacts on biodiversity and explored the opportunities for ecologic compensation.

At Valio dairy farms, the best ways to secure biodiversity are related to carbon farming practices, organic milk production and the grazing of dairy cows. Additionally, many of the measures in Valio’s climate programme are designed to both reduce greenhouse gas emissions and support biodiversity.

In 2019-2021 we worked with the Rural Women’s Advisory Organisation to survey biodiversity at more than 60 dairy farms in Finland. The participating farms considered biodiversity as very important and wanted to take measures to support it. In addition to assessing the current state of biodiversity, the surveying provided concrete tips on promoting biodiversity, e.g. by identifying farm-tailored, easy-to-implement and cost-efficient measures and support opportunities.

No more guilty conscience about letting the edges of fields grow and the lawn become almost meadow-like before mowing. The more natural pastures have been cared for by grazing alone, without supplementary fertilising. – Post-survey feedback from a dairy farmer

In summer 2020 we monitored indicator species in the agricultural environment together with the Finnish Biodiversity Information Facility. Some twenty dairy farms around Finland participated in the observations.

Valio dairy farms do not use imported soy as feed, which promotes the cultivation of oleiferous and protein crops in Finland. Grain legumes (pea, broad bean) and legumes (clover, medick and vetch) bind nitrogen from the air into the soil, so less industrial fertilisers and cattle manure are needed to fertilise fodder crops. Pollinators thrive on legume and rapeseed flowers.

Biodiversity is also the diversity within a species. Species native to Finland are Western Finncattle, Eastern Finncattle and Northern Finncattle. The gene bank of the indigenous species is of great importance for animal breeding, and the traits linked to their genes may be needed in breeding activities, e.g. as climate conditions change. Finncattle breeds are also milked at Valio Group dairy farms. Additionally, on a global scale, we help to preserve the red dairy stock.

Milk production weakens biodiversity through nutrient pollution, the use of pesticides and the clearing of fields.

Adverse impacts on biodiversity can be mitigated in many different ways, e.g. through diverse crop rotation, winter vegetation, preference for uncultivated edge areas and diverse edge zones, and green manure. Abstaining from ploughing and minimal use of plant protectant products also increase biodiversity. Organic farming and balanced grazing are effective ways to maintain biodiversity in agricultural areas, and they enrich vegetation and birdlife in particular.

Valio is currently participating in the FIBS and Sitra programme that was launched in spring 2022 to pilot the Science Based Targets Network’s nature targets.